Examples of original International Art for sale or rent (not all art is available to rent). More art available. Contact us for details.

Inspired by the temples of the ancient city of Bagan

The paintings are based on images from temple murals of the ancient city of Bagan, Myanmar, Burma. Bagan became an importance centre of Buddhist culture when an extensive program of temples called “payas” were built between 1044 and 1380 CE within which are thousands of frescoes painted in intricate detail depicting stories from the life of Buddha. The murals show stylistic and iconographic similarities to north east Indian art.

The paintings based on these murals are painted in fine detail in acrylic on cotton and polyester and are stretched. The stories of the life of Buddha are intertwined with extraordinary decorative elements and spirits, birds, animals and plant forms in vibrant colours with some in black and white.

Artists include Kyar Phyu who also worked for the archeology department as did his son and grandson Tin Tin an artist of note who specializes in the murals of the Hpayathonzu Paya (temple). Lin Phyoe has devised a technique with polymer and natural pigment on canvas to represent the exterior images of temples originally created in stucco. The murals show stylistic and iconographic similarities to north east Indian art. 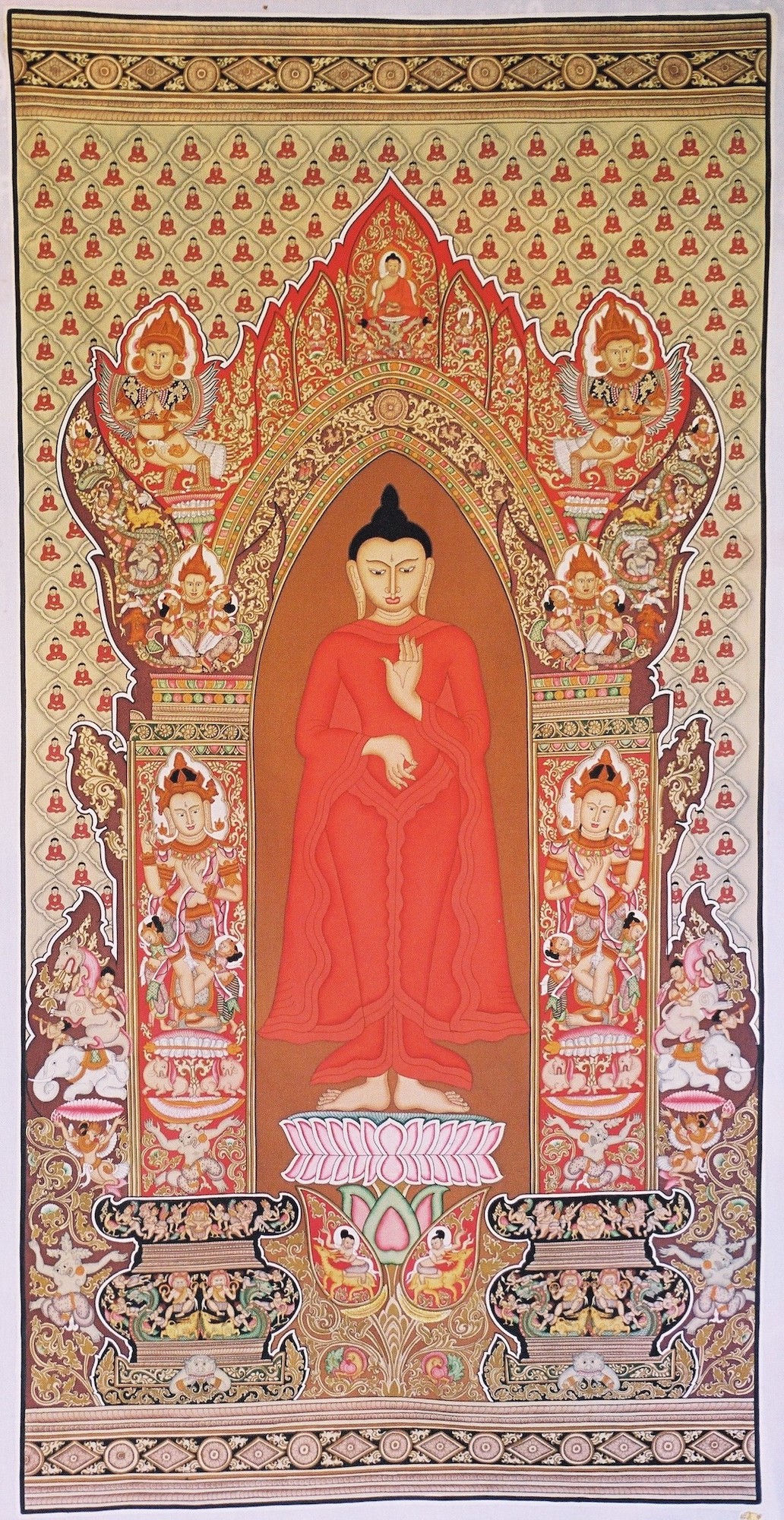 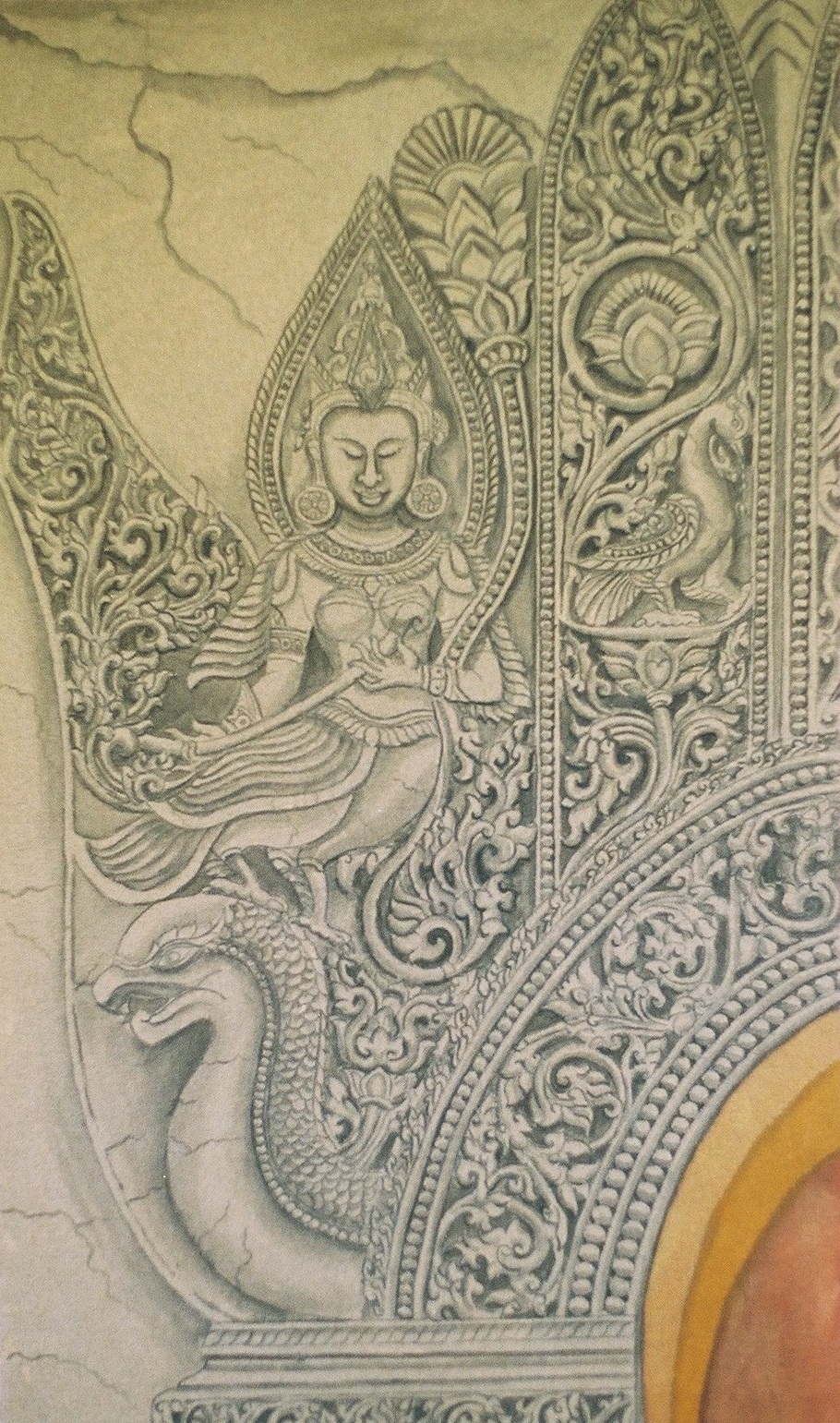 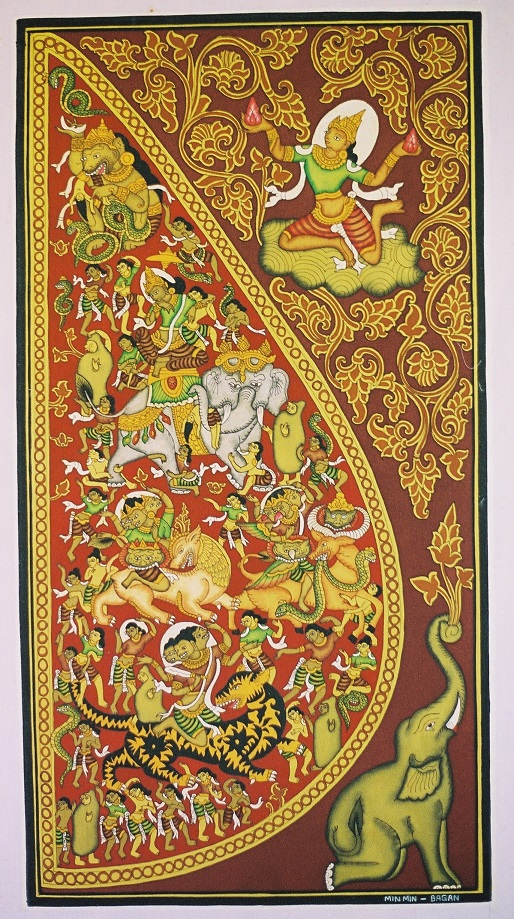 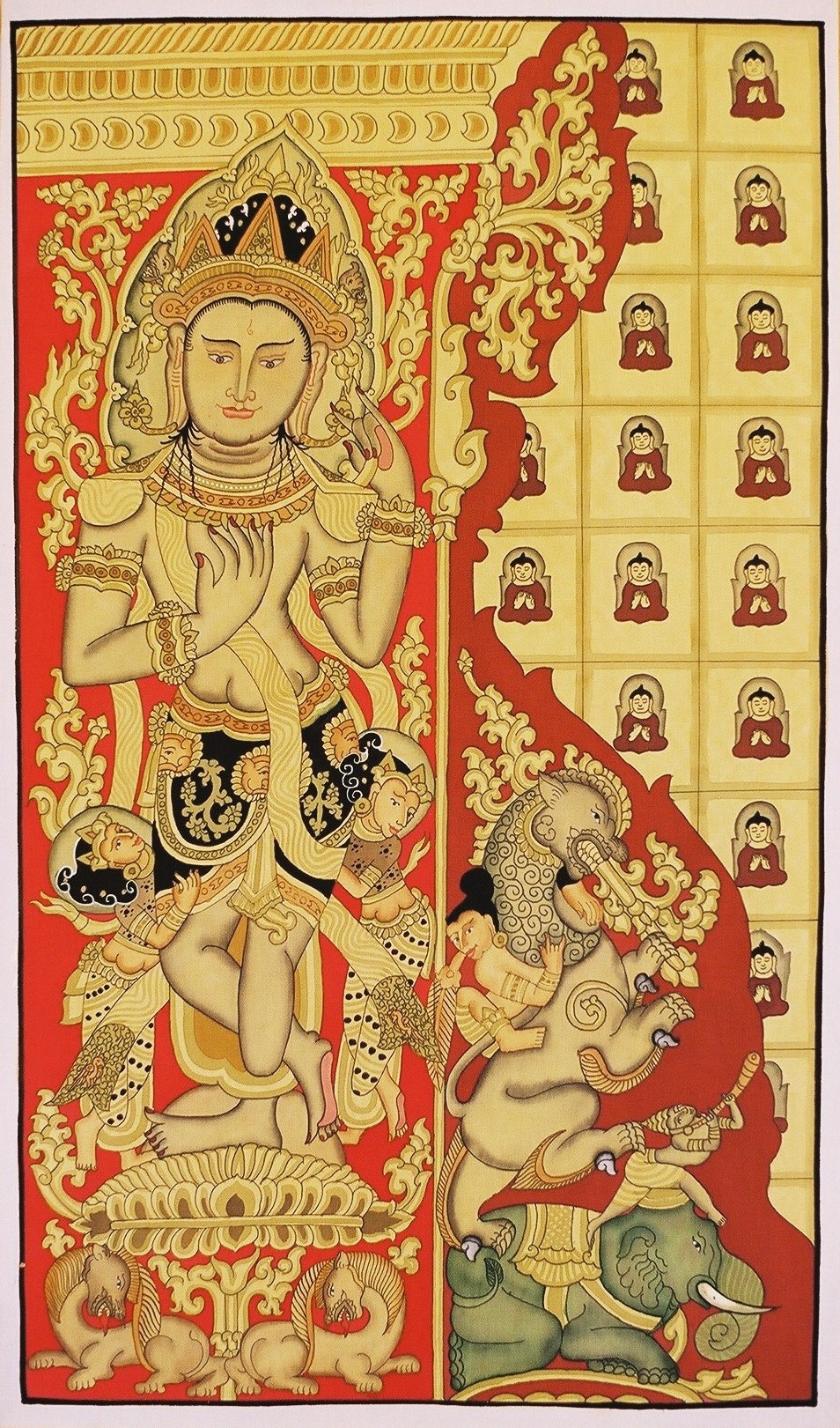 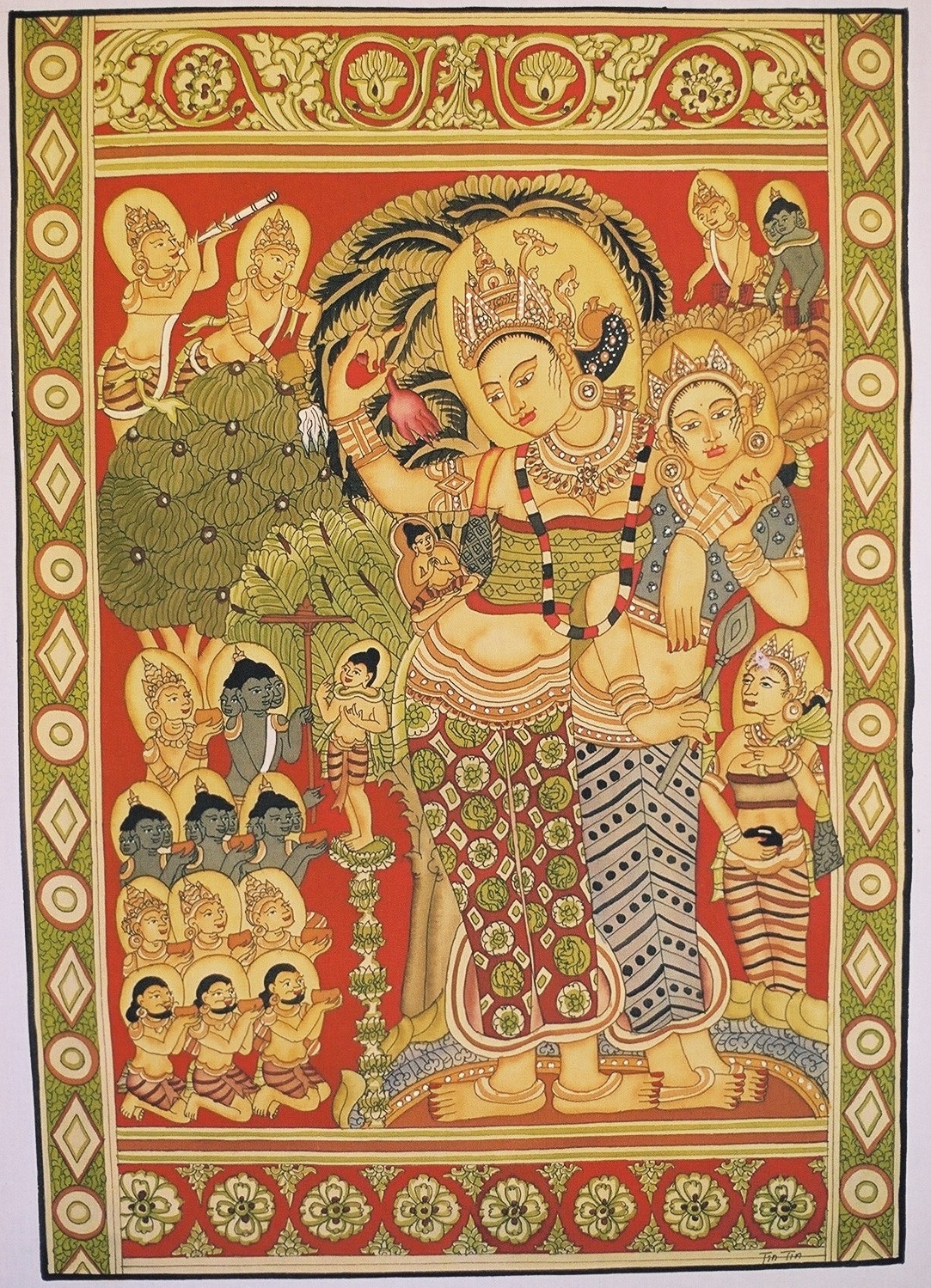 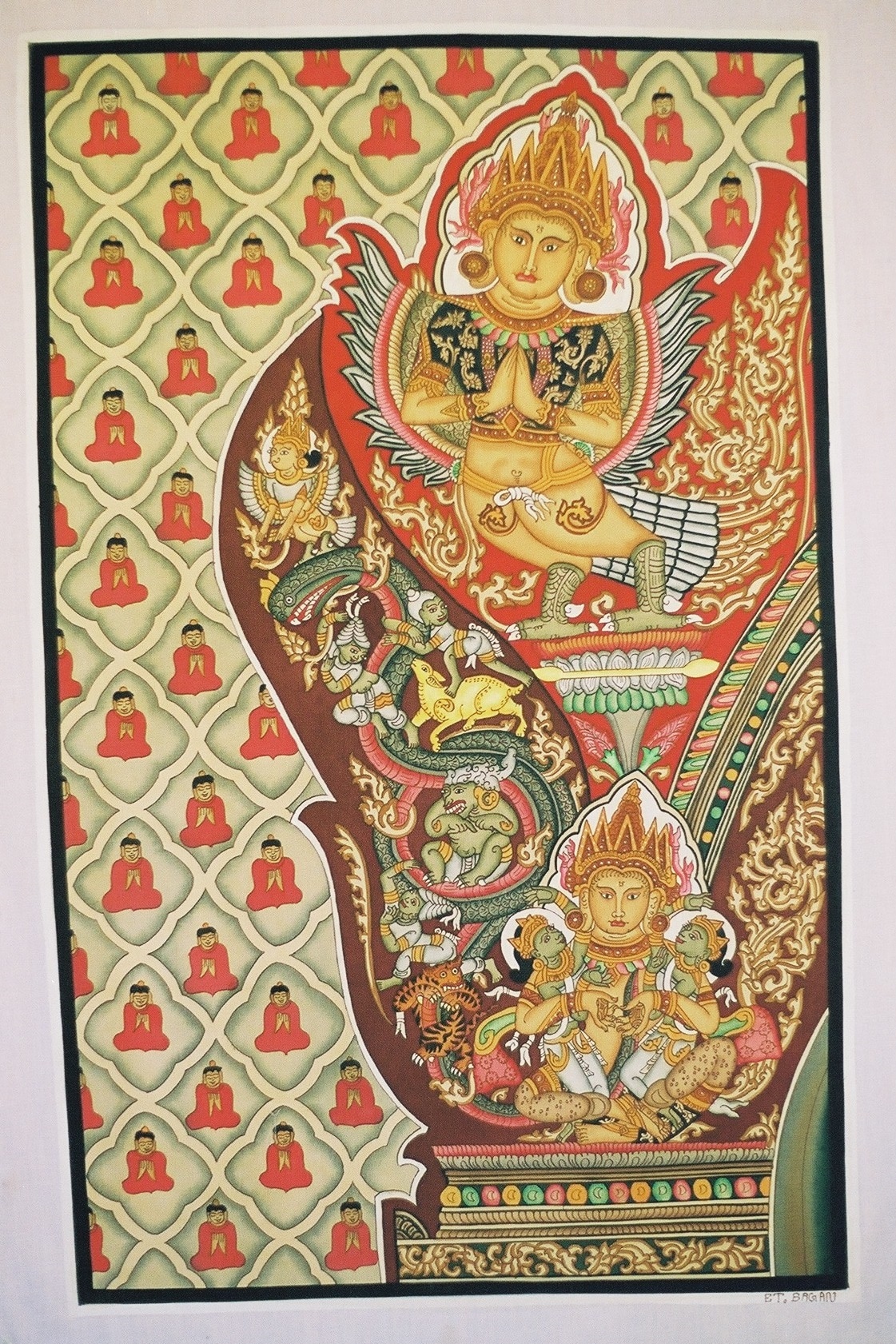 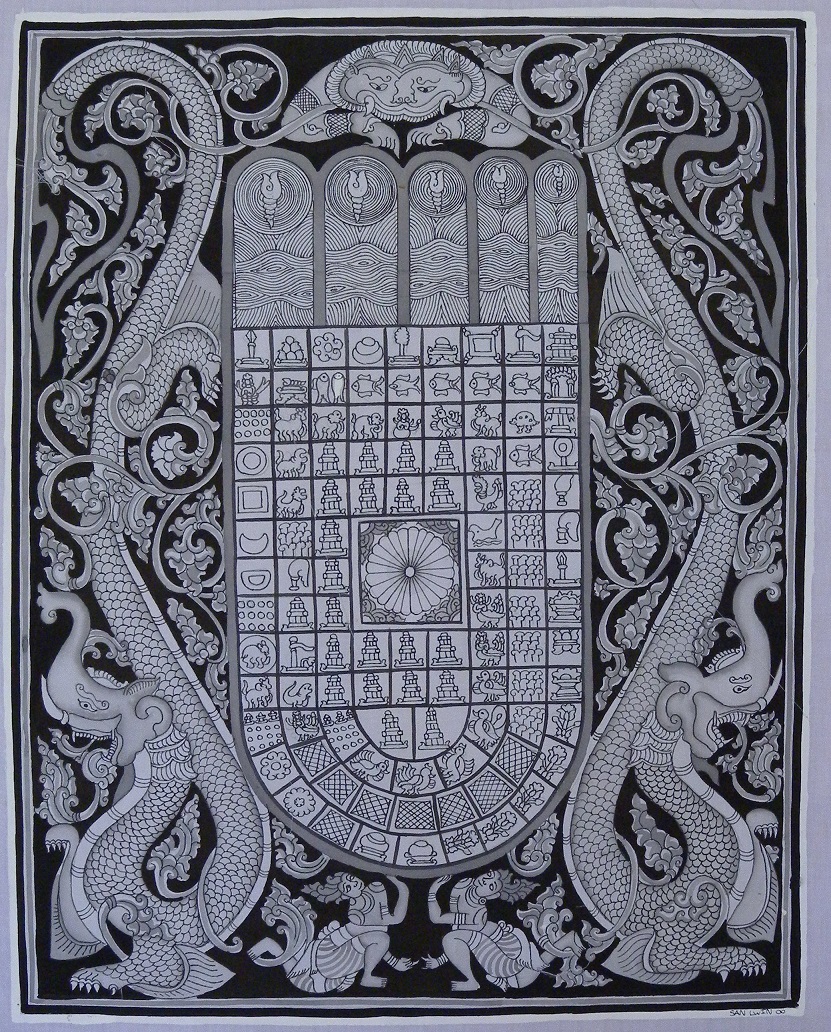 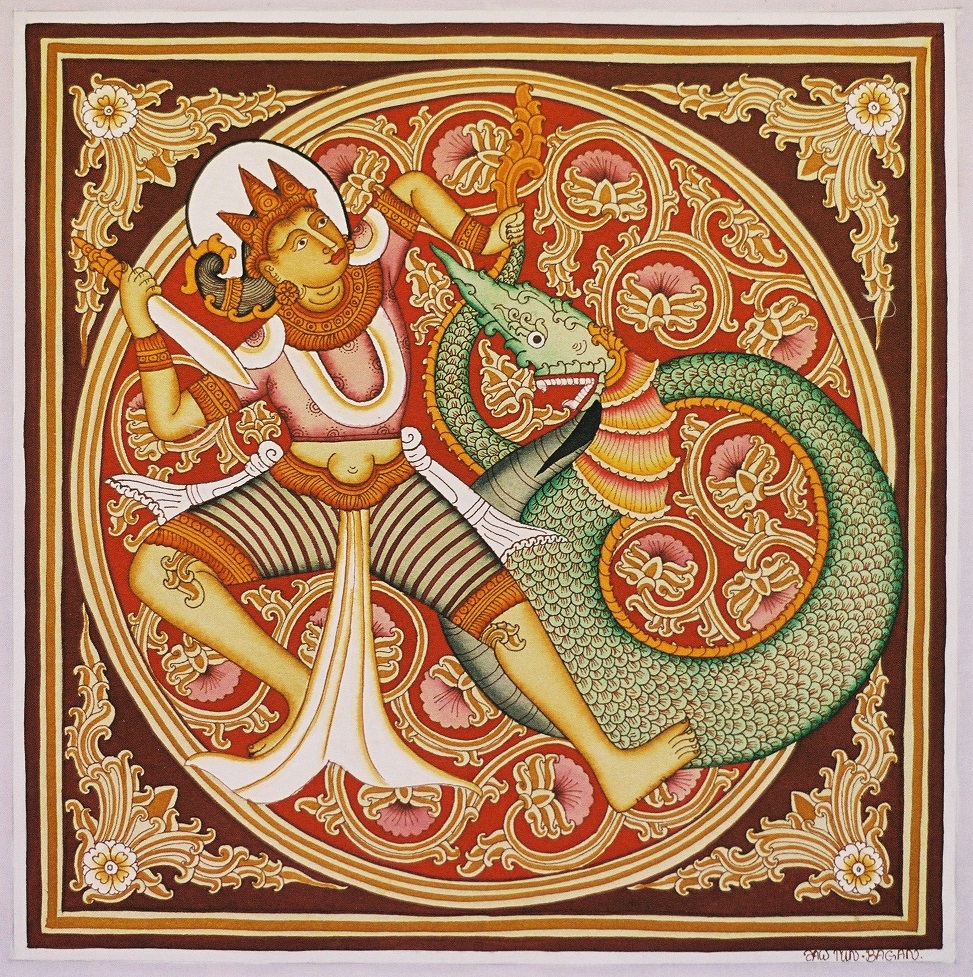 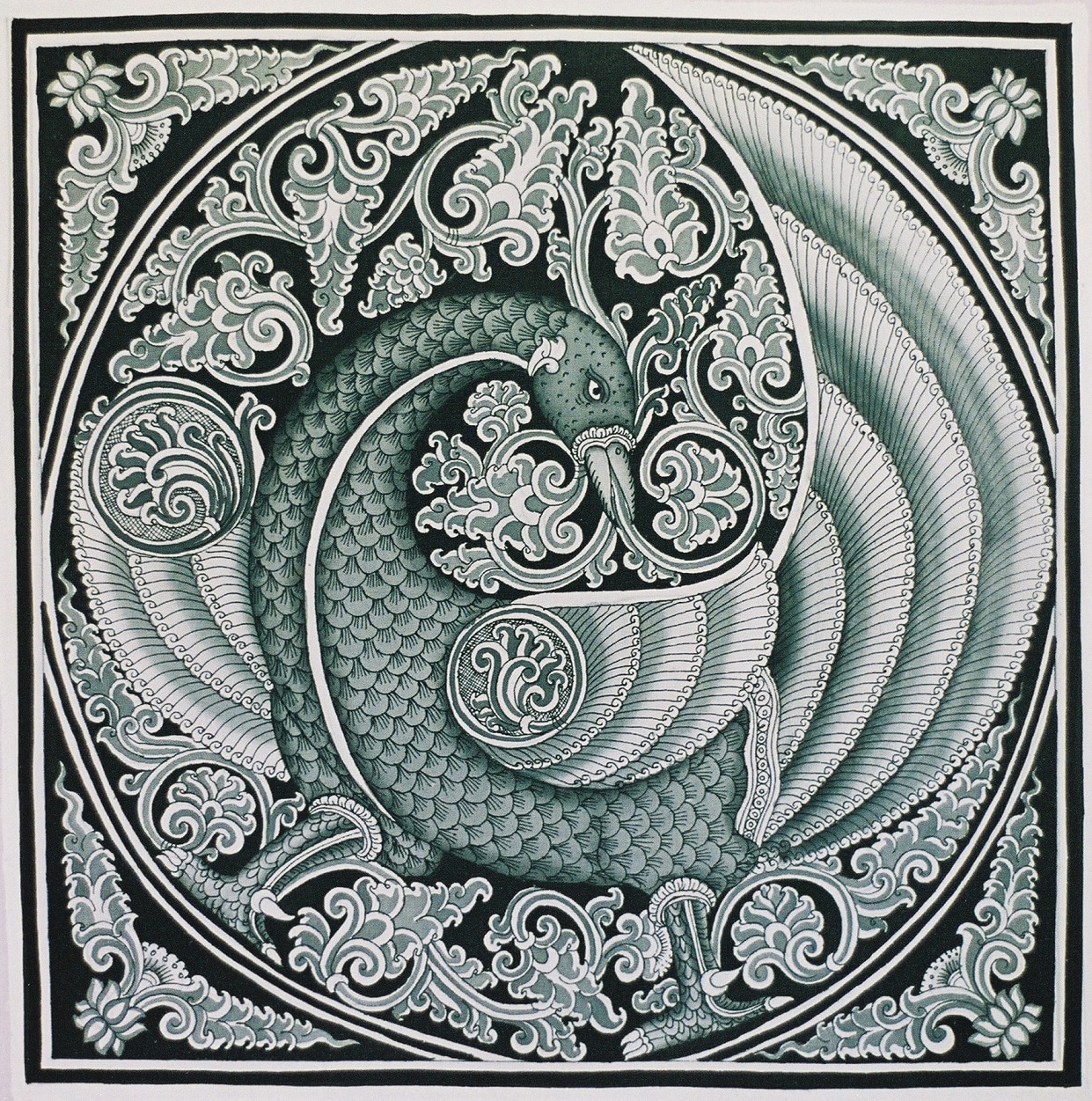 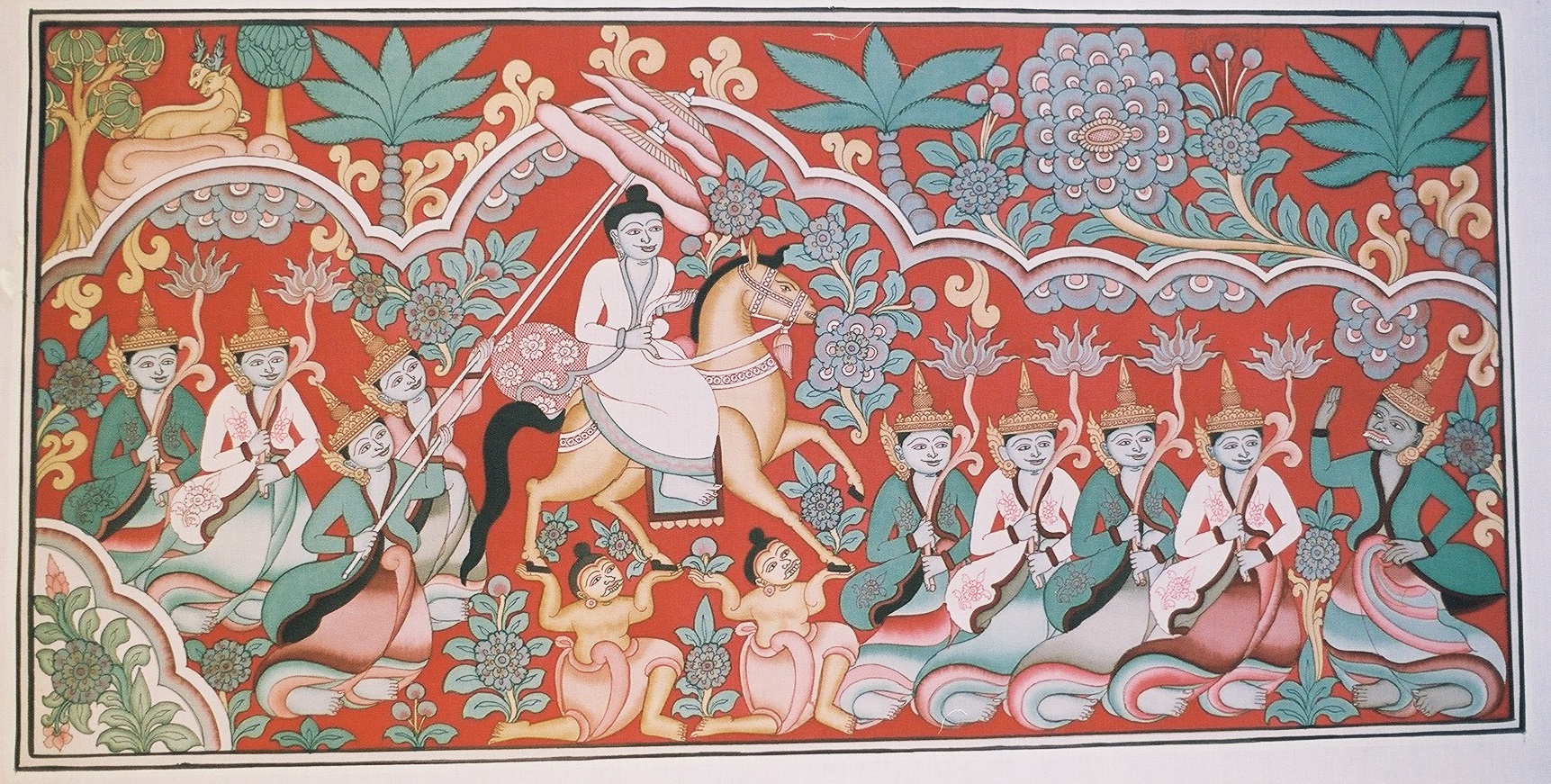 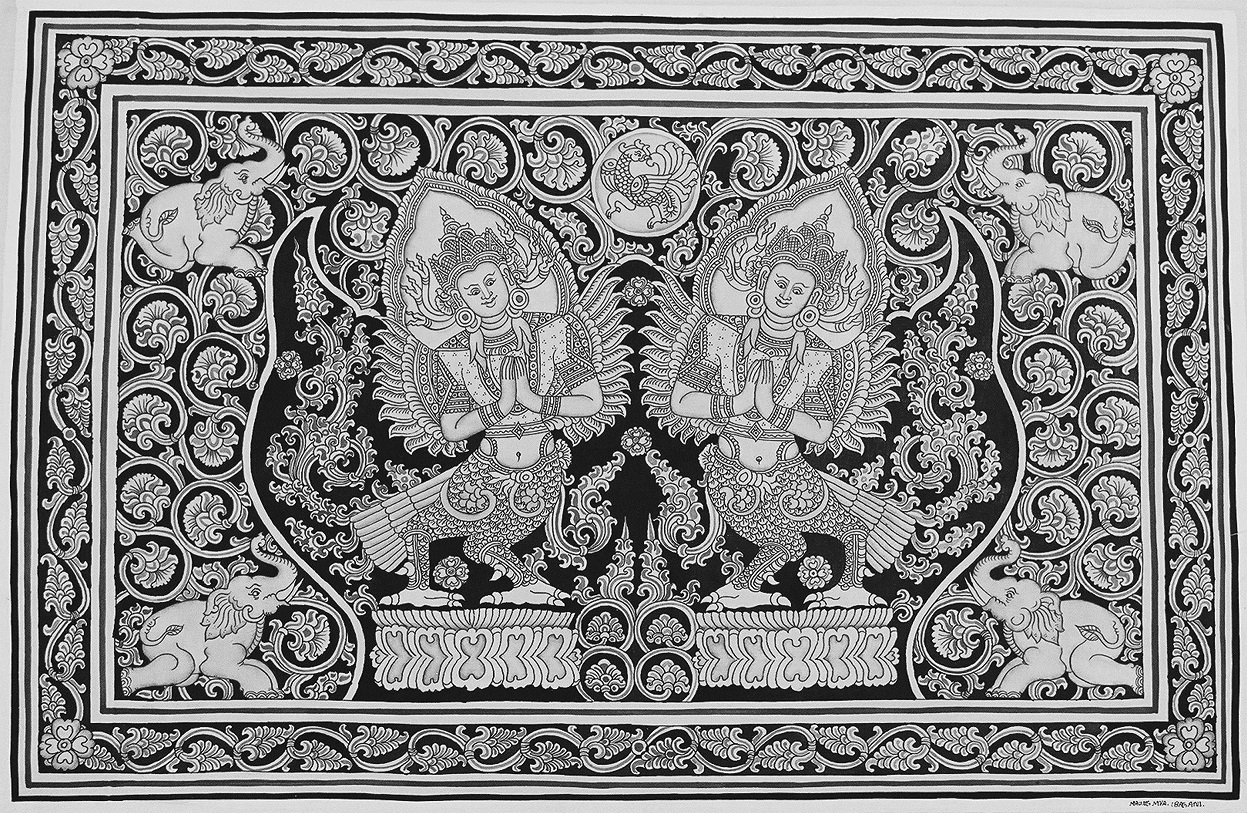 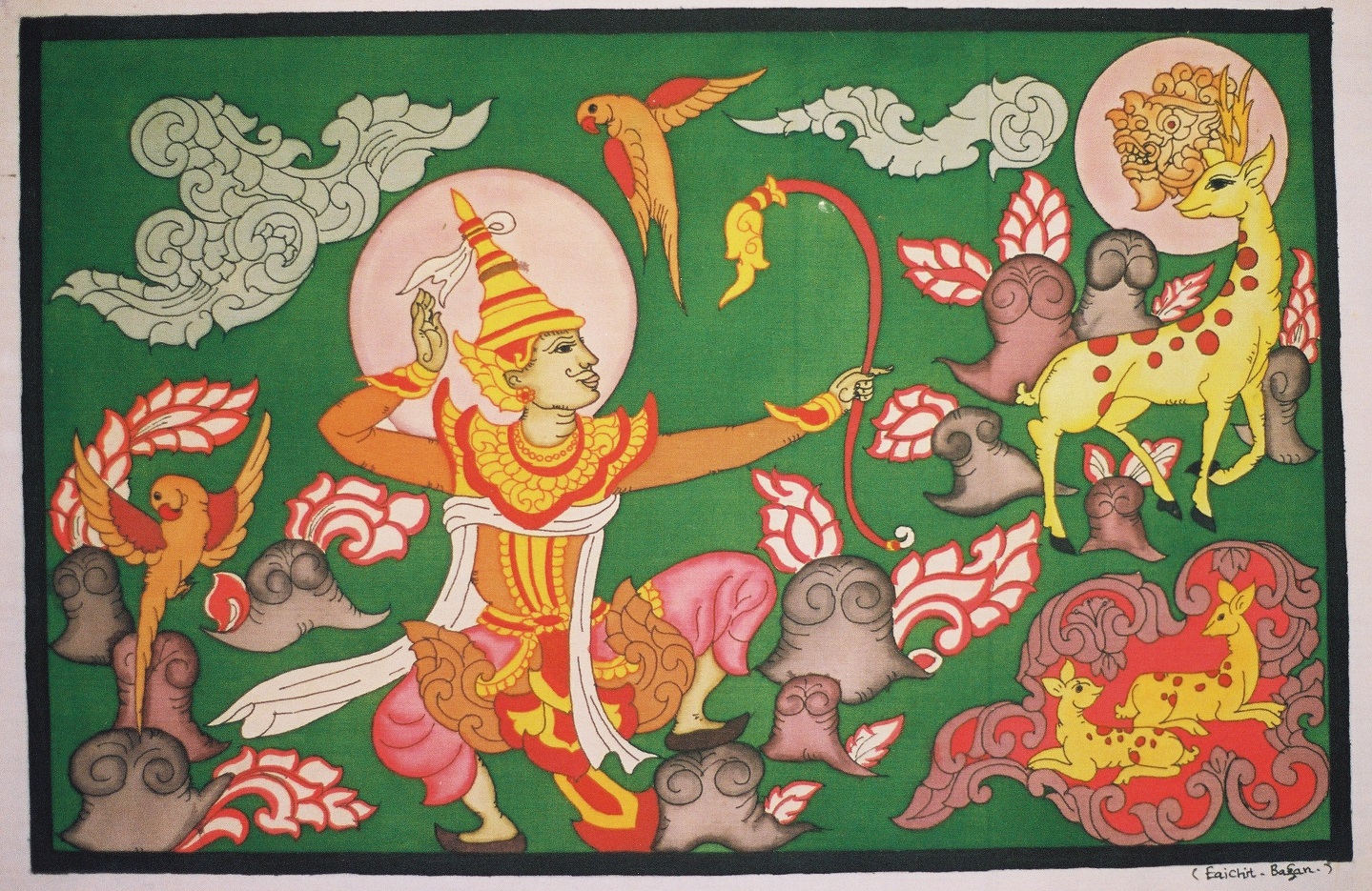 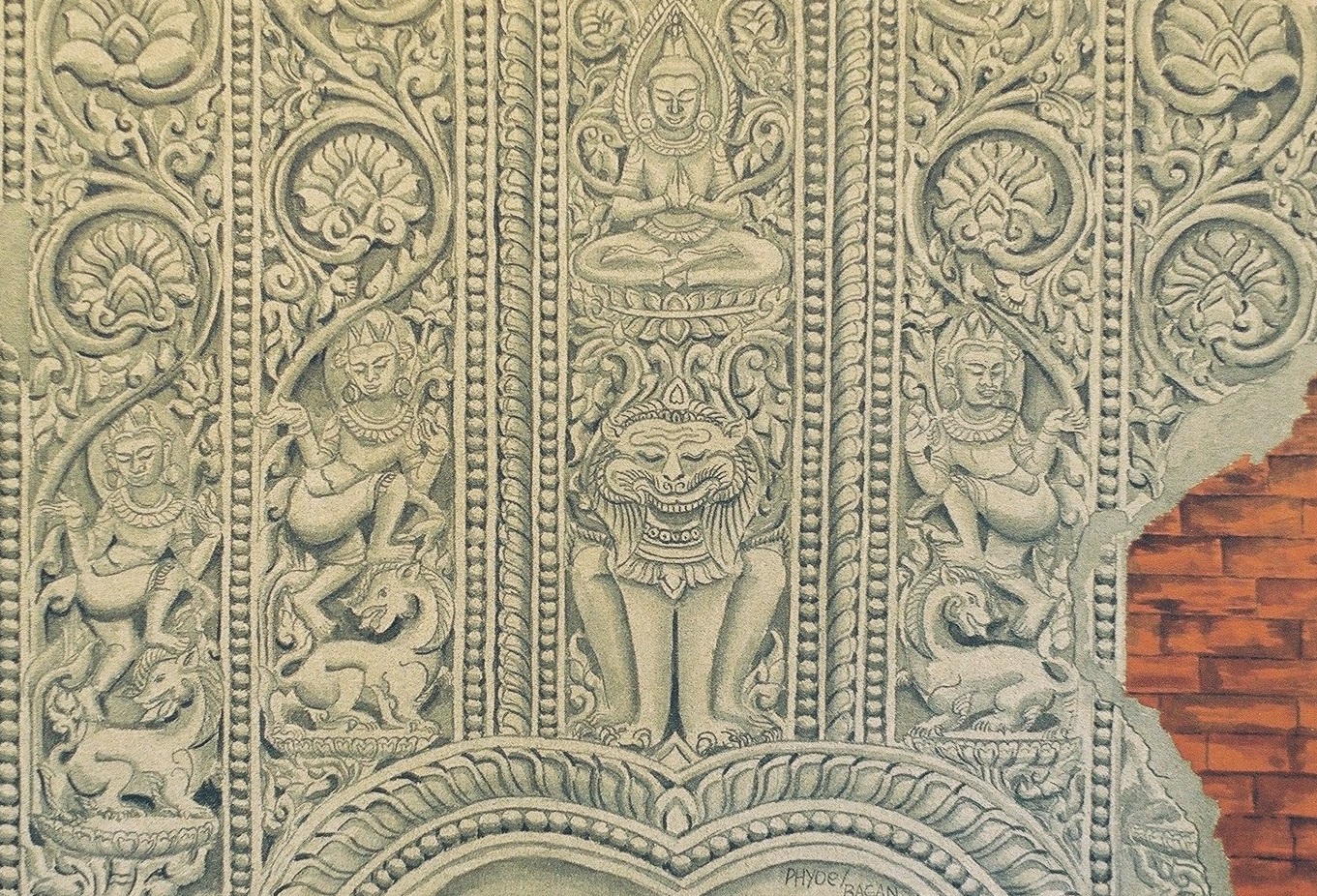 The project East-West Conversations is an intercultural dialogue between the artistic cultures of Persia and Australia – east and west – with works of art that combine Persian calligraphy by Homayoun Ajdari with contemporary visual expression by painter and printmaker Angelika.

The objective for the calligrapher and artist is to develop intercultural dialogue between East and West incorporating the cultural heritage of Persia with that of contemporary Western artistic expression.

Both artist and calligrapher find poetry an inspiration and have written poetry of their own. Angelika and Homayoun have discussed some of the central themes of life as expressed in the multilayered Persian poetry of Rumi and Hafez and by German philosophers like Schopenhauer. These themes include life and death, creation and destruction, transformation and communication. They have used these themes as inspiration to create works in visual form. They have explored universal human understandings that transfer across cultures and have discovered a synergy in each other’s work. 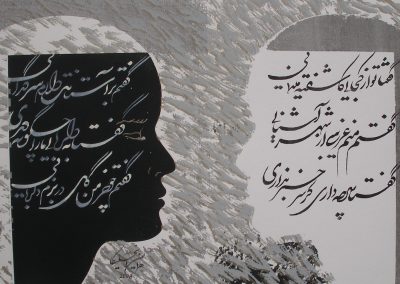 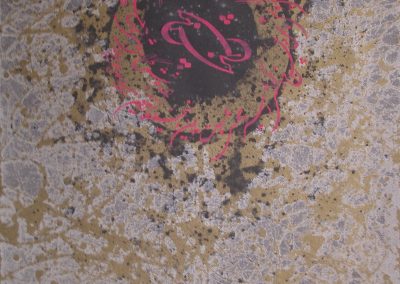 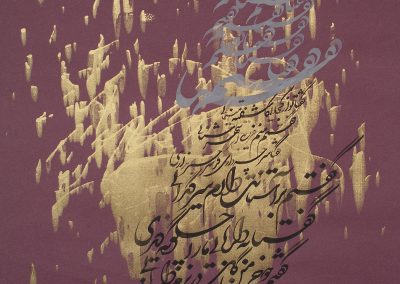 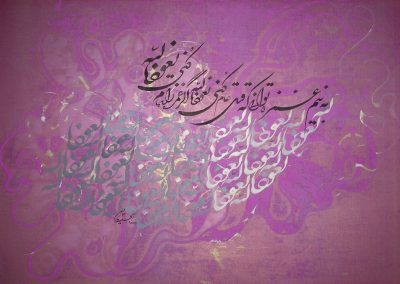 4HA: Refuge in you 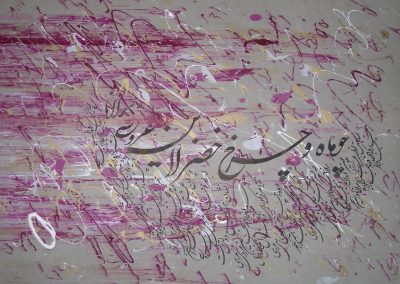 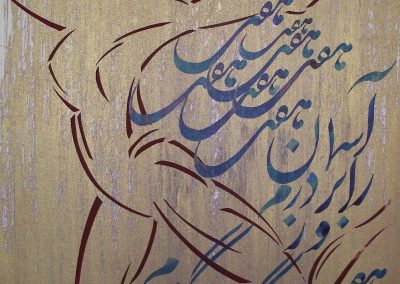 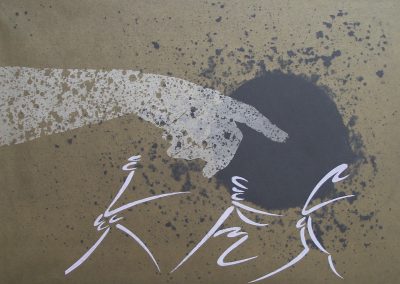 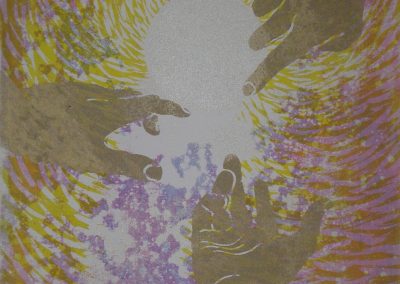 8A: Three hands raised towards the sun

ABOUT THE WORKS: EAST WEST CONVERSATIONS

1HA: Face to face – the conversation 32 x 67 cm White and black calligraphy text on gold/silver/grey print on white printmaking paper
The art image shows a cross cultural conversation between a black person and a white person. The work can be interpreted in several ways, both in the Persian text by the poet Rumi and in the image. It can be seen as a conversation between two people or a conversation within the self with the answer seen as a reflection. Person one in the text asks, “Where are you from? You look so troubled.” The response from person two is, “I am a stranger, but from the city where everybody knows each other.” Person one asks, “What do you have in your mind? The response from person two is, “You.” Translation by Homayoun

2HA: Big Bang 46 x 65 cm Red calligraphy text on gold/silver print on black Ingres paper. The background print is part of the Vortex series by Angelika.
Both the art image and the text refer to the beginning of life – the big bang – when stars were born and the galaxy was formed. It shows Persian calligraphy text around the black hole in the centre. It also refers to the world which is always rotating and that movement is connected to the life force that creates life. The Persian word in red text repeated around the central black hole is “charkh” which means rotation.

3HA: Conversation flow 46 x 64 cm Black and grey calligraphy text on gold mono print on mulberry paper.
The text is from a poem by Rumi the Persian poet about a conversation flowing between two different people, who may be from two different cultures. Rumi appreciated diverse cultures. The poem also represents symbolically the intercultural dialogue that is the focus of this project. The text is intertwined, as in an intense conversation, with the printing ink in the art image which also flows like a dance just as synergistic conversation flows like a dance.

5HA: Wedding poem 46 x 62 cm Coloured acrylic paint on grey Ingres paper with black calligraphy text
The text is the complete Wedding poem by Rumi. It refers to a life partnership and intimate relationship on both the physical and spiritual levels. The design shape of the calligraphy, repeated several times, is in Persian culture the shape of the beginning of life ie a foetus, the result of a union of two people. This design shape called paisley in the West, is used throughout Persian art, architecture, carpets and miniatures. The poem text reads:

6HA: Dancing over the 7 seas and 7 skies 50 x 72 cm Print with figure dancing on gold background is from the Dance series by Angelika with blue ink calligraphy
The text is a poem by Rumi: “I will traverse over all of the seven seas and seven skies to be with you.”  Here Rumi refers to the seven layers of life which are seen as a necessary transition from the physical towards the spiritual realm. On another level, the poem refers to the love of one person for another and that the person would go to any lengths, ie traverse the seven seas and skies to be with their loved one. The number 7 is very important number symbolically in Persian culture.