Examples of original Aboriginal Art for sale or rent (not all art is available to rent). More art available. Contact us for details. 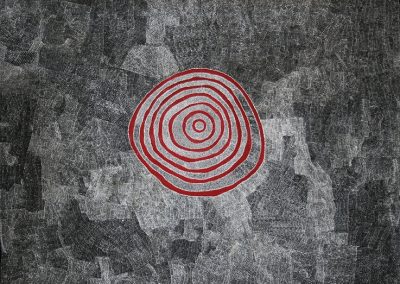 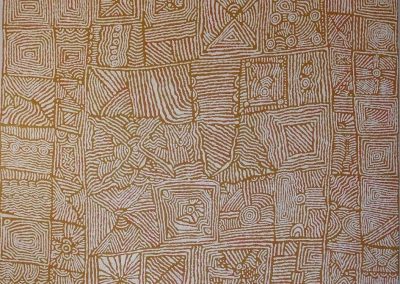 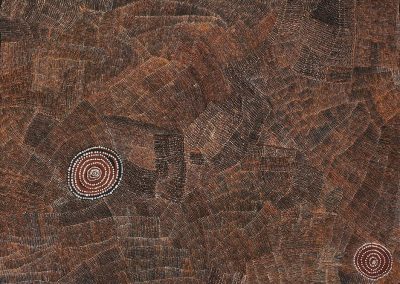 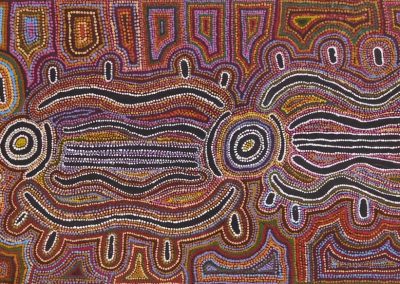 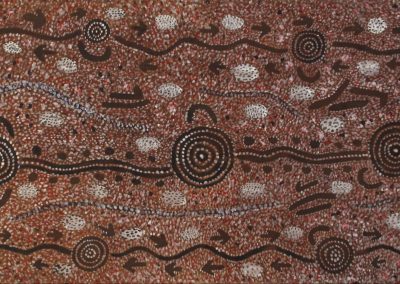 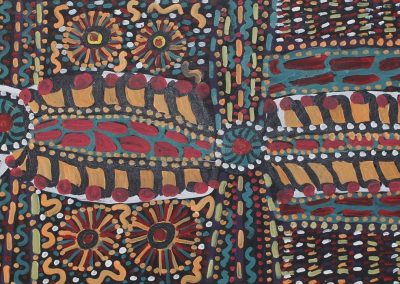 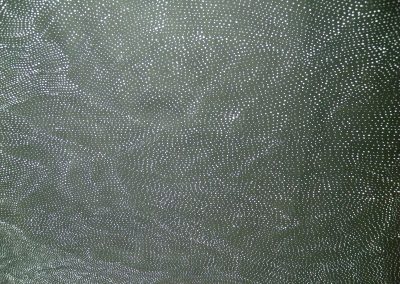 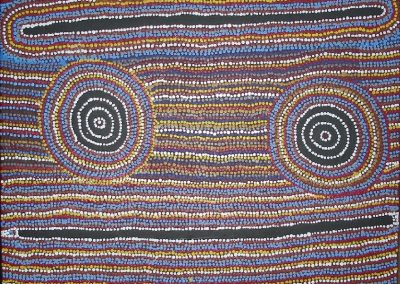 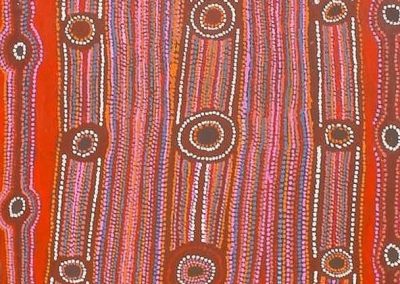 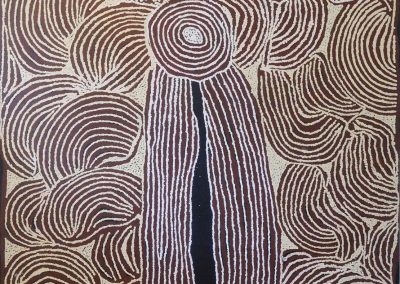 * Johnny Warangkula Tjupurrula was a major artist involved in beginning the painting movement at Papunya in the early 1070s.
He is custodian of the water dreaming. 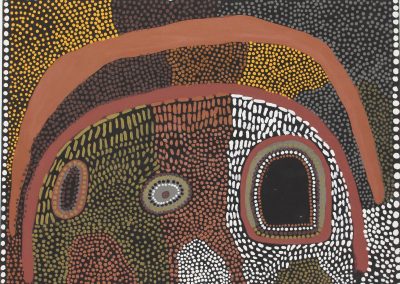 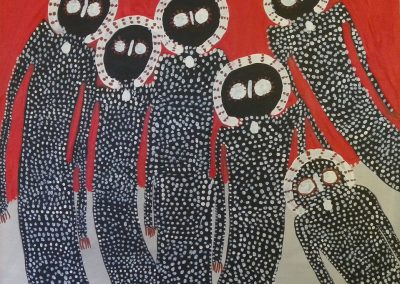 * Lena Nyadbi’s art is presented in the building of the Quay Branly in Paris.

Trevor Nickolls is an artist of significance in Australia; he has inspired and influenced many artists since he began working in the 1970’s. In 1990 with Rover Thomas he represented Australia at the Venice Biennale the first Indigenous artists to do so. His work is represented in all the major State and National Galleries in Australia as well as corporate and private collections. Overseas a number of his works are in museums and collections in Europe Canada and the United States.

Trevor Nickolls creates art that is unique in style incorporating stylistic elements of traditional Aboriginal art such as dot painting and rarrk in combination with imagery from diverse sources like comic books and the works of masters in the history of western art. The resulting works at times contain complex iconography with multiple layers of meaning and at times combines tragedy with humour. A major theme for Trevor Nickolls’ work is Dreamtime to Machinetime a theme which articulates the cultural transition from the traditional Aboriginal heritage of the Dreamtime into the world of mechanisation and technology. His work presents interactions between these two different worlds and shows the dilemma of living in both. 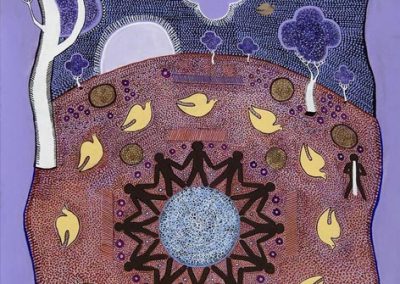 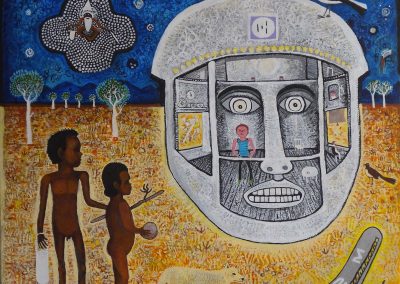 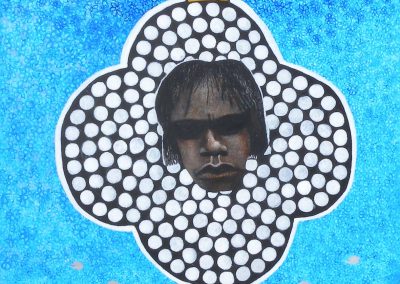 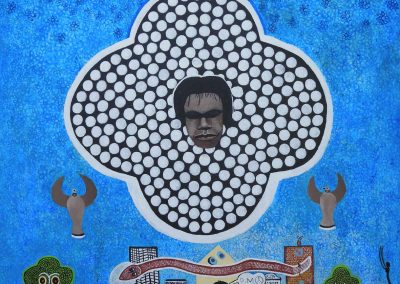 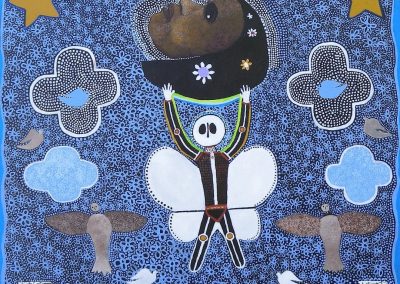 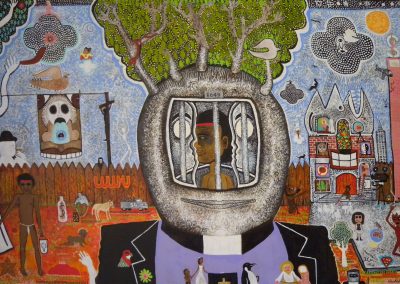 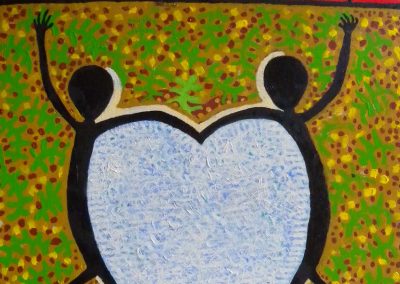 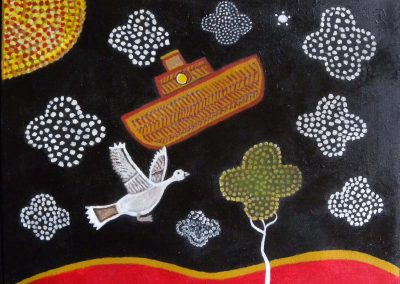 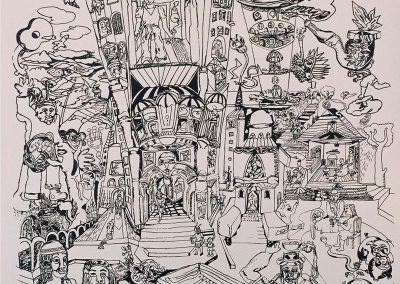 Peace around the Billabong 2006, 190 x 120 cm, acrylic on Belgium linen
There is unity and peace among nature and all people; here they are united in a circle around the billabong with doves (symbol of peace) also in a circle. The setting is a peaceful location on Aboriginal country overseen by the Aboriginal spirit above.

A Head of the Time: The First Contact 2009, 91 x 91 cm, acrylic on Belgium linen
This painting is a work connected to the theme Dreamtime to Machinetime. To confirm this the boomerang in the lower right of the painting has the text D 2 M a reference to Dreamtime to Machinetime. The painting shows two Aboriginal children focusing on a metal structure in the shape of a head which is a spaceship. Inside is a non Aboriginal boy who directs his gaze to the two children. It is a friendly “first contact” between them. The metal spaceship is personified as a face and is rigid and monochromatic in contrast to the environment of the Australian landscape which is coloured. A senior Aboriginal spirit person is resting on a cloud while the milky way above is a reference to creation and the dreamtime.

Heaven 2011, 91.5 x 91.5 cm acrylic on Belgium linen
This painting was one of a series of paintings commissioned for the 2012 Adelaide Festival of Arts exhibition called Deadly! Between Heaven and Hell exhibited at Tandanya National Aboriginal Cultural Institute in February and March 2012. Trevor Nickolls uses the theme of Dreamtime to Machinetime in this painting which focuses more on the Dreamtime. It depicts a thoughtful Aboriginal woman’s head set within a dotted protected cloud shape transiting to the Dreamtime or heaven with stars above. An owl a western icon symbol of wisdom oversees this. The high rise buildings of the Machinetime world are shown underneath

Dreamtime to Machine Time Heaven and Earth 2011, 122 x 122cm, acrylic on Belgium linen
This painting was one of a series of paintings commissioned for the 2012 Adelaide Festival of Arts exhibition called Deadly! Between Heaven and Hell exhibited at Tandanya National Aboriginal Cultural Institute in February and March 2012. Trevor Nickolls used the exhibition title Deadly! Between Heaven and Hell to articulate his major theme of Dreamtime to Machinetime in this painting. It depicts a city scene in the lower part of the painting and an Aboriginal person above set within a dotted cloud transiting back to the Dreamtime with stars above. An owl a western icon of wisdom oversees this. Between heaven and hell is a snake a reference to the rainbow serpent. The world of the Machine time below has a number of the usual Nickolls references like the high-rise buildings fences and a suburban home; this and the trees are personified with faces. At the centre is a confident young Aboriginal man with the text in his speech bubble spelling out a website address Dreamtime.Machinetime.peace.au mediating the territory between the two realms and using the well-known peace symbol – a gesture of conciliation.

Metamorphosis 2011, 91.5 x 91.5 cm, acrylic on Belgium linen
The painting Metamorphosis is about the transformation of the physical being into the spiritual. An Aboriginal man has transformed into a butterfly (a mimi spirit butterfly) on his way to the spiritual realm. His head has already transformed into a Wundjina spirit with no mouth. He is holding up the head of a young Aboriginal woman which he knows he cannot bring with him however he is still attached to her. This painting won the Blake Prize in 2013.

Brush with the Lore 2010, 187cm x 140 cm, acrylic on Belgium linen
Brush with the Lore is a complex painting about the intersection of Aboriginal and non Aboriginal Australia including the history religion the past and the present – in an everyday Australian setting. It is about several lores (stories of cultures) and laws including Aboriginal and broader Australian lores and laws.  The central element is the boab tree which contains an Aboriginal man behind bars. Boab trees were in the past used as prisons also for Aboriginal people. There are references in the painting to a number of serious issues in the interrelations between Aboriginal and non-Aboriginal including the Stolen Generations and Maralinga; and references the value of cultural heritage to Aboriginal peoples. On the lighter side the painting includes Mighty Mouse.

Warmun Love Spirits 2002, 76 x 51 cm, acrylic on Belgium linen
The painting refers to Trevor Nickolls’ travel to Warmun to visit Rover Thomas. The love spirits form a heart and dance in the foreground with Purnululu (the Bungle Bungles Ranges) in the background.

Warmun Spaceship 2002, 51 x 66 cm, acrylic on Belgium linen
The painting refers to Warmun where the artist visited Rover Thomas in his country. In the dark night sky there is a bird and a boat here deemed a spaceship surrounded by spirit clouds.

PRINT (LIMITED EDITION): Walkabout 1973, limited edition print of 5 black and white prints, hand-printed, Size 56 x 81cm (Framed 83 x 110 cm)
This limited edition series of prints are based on the largest most complex pencil drawing complete by Trevor Nickolls in his lifetime. This drawing and the prints were created at the time when he was working on his iconic complex early works including the large painting Childhood Dreamtime 198.2 cm x 289.6 cm collection of the National Gallery of Victoria which also acquired one of the five prints in this edition.